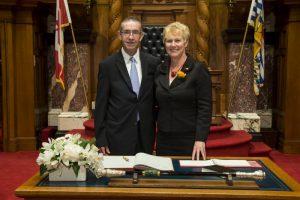 Katrine Conroy has represented Kootenay West as MLA since 2005. From 2017 to 2020 she was British Columbia’s Minister of Children and Family Development. In November 2020 she became the province’s first female Minister of Forests (formerly Ministry of Forests, Lands, Natural Resource Operations and Rural Development). Since 2017 she has also been Minister Responsible for the Columbia Basin Trust, Columbia Power Corporation and the Columbia River Treaty.

While in opposition Katrine was the caucus whip in addition to being spokesperson for Seniors, Interior Economic Development, Labour, Freedom of Information (FOI), Columbia Power Corporation, Columbia Basin Trust and the Columbia River Treaty.

Katrine had a varied career before becoming a MLA and was one of B.C.’s first female power engineers, an early childhood educator, Executive Director of a multi service non-profit agency, a college instructor, and a small business person.

Katrine lives outside of Castlegar in Pass Creek, where together with her husband Ed (1946 -2020), they ran a successful ranch breeding prize-winning Polled Hereford cattle, raised four children, and have nine grandchildren.